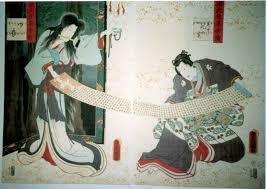 Check out a wonderful essay, Texting the Shining Prince, by David Andrew Stoler from Teachers & Writers Magazine. In it Stoler tells about how he made ancient Japanese poetry relevant and vital to New York City teenagers. It’s a great read! Here’s an excerpt:

And while it may be true that each generation of teenagers invents the entire world from scratch (just ask them!), we’re not talking here about text messages and Twitter, despite the similarities. No; a thousand years ago teenagers in the Japanese Court were doing the same thing as their modern counterparts—sending secret messages back and forth—limited then by formal poetic structure instead of digital character count. These messages, though, were being sent under markedly different conditions than those faced by modern-day texting teens: traditional court etiquette made it difficult for a teenage boy to even properly see a girl who wasn’t  in his family, forget about holding a conversation. And if the wrong boy was caught talking to the wrong girl, they weren’t simply sent to their rooms, didn’t  just get their phones taken away for a month—they were exiled far away, sent to live a life of poverty, coldness, and isolation.

So, instead, Japanese teenagers—and, in fact, most members of the Heian  Japanese court—sent each other poems. A glimpse of just the outline of a member of the opposite sex behind a carriage window screen was all it took to begin a steady stream of poems back and forth. Often snuck out in the sleeves of staff members, the poems followed the strict structure of early 11th-century Japanese Waka, a form  that  dictated  a set number of characters /syllables, and whose subject matter often revolved around nature. The quality of the metaphors—and the penmanship—were used to judge the potential suitability of a sweetheart: the equivalent of today’s Jordans or Uggs. Puns and double-meanings abounded—if the poems were intercepted, one could at least then argue his or her innocence.

The form was famously immortalized in Murasaki Shikibu’s The Tale of Genji,  a classic text considered by some to be the first-ever novel.The book follows the life and loves of the title character from his boyhood to his death (and beyond, actually—the English translation is 1000-plus pages long and goes deep into the romantic history of his sons, too), and is loaded with Waka that are both opulent and emotional. It also makes a perfect lesson for middle and high school students today, connecting them to the history of poetry via a structure and a type of secrecy that are immediately familiar to them from the late-night texting barrages that swell their parents’ cellphone bills each month.

Click here to read the rest of the essay.

View all posts by witsalliance